DOWNLOAD A PRIMER on Hedge Funds ABOUT SHORT SELLING financialdetectives.org

Between 2005 and 2008, 55 percent of hedge fund managers had experienced a rise in the proportion of their capital coming from the institutional sector, with 14 percent experiencing a decrease, according to a November 2008 survey by research firm Preqin Ltd.29

Three-quarters of the institutional investors surveyed by Preqin reported that their hedge fund investments have not met their expectations within the 12 months prior to the survey (published in November 2008). Yet, 46.6 percent of surveyed investors said their long-term outlook on the hedge fund industry remains positive.

A bfinance (an independent financial services consultancy) survey of pension funds conducted in October 2008 suggests that the “broad meltdown seems to have further cemented pension funds’ desire to increase exposure to alternative assets and strategies and decrease reliance on equities.” Thirty-seven percent of respondents said they planned to decrease exposure to equities in the next three years compared to 26 percent for fixed-income and four percent for hedge funds.30

Casey Quirk and The Bank of New York Mellon forecast that hedge fund assets will reach nearly $2.6 trillion by year-end 2013, based on their interviews with senior industry professionals, including institutional investors, between December 2008 and March 2009. Nearly half of the future flows will come from North America. “Public and corporate pensions will continue to gradually build their hedge fund portfolios, holding more than 5.5 percent of assets in hedge fund strategies by 2013.”31

The two key drivers of recovery for hedge funds are “the fact that investors and advisors broadly still believe in the premise behind hedge fund investing, and the way in which investors are rethinking hedge fund strategies’ role within their broader portfolios,” the survey concluded.32

In testimony before the Senate Banking Subcommittee in July 2009, Joseph A. Dear, Chief Investment Officer for CalPERS, stressed that hedge funds make “realization of our target rate of return feasible.” He noted that the pension fund’s return in hedge fund investments over the past five years has been 3.89 percent, “considerably above what we earn in public markets.”35 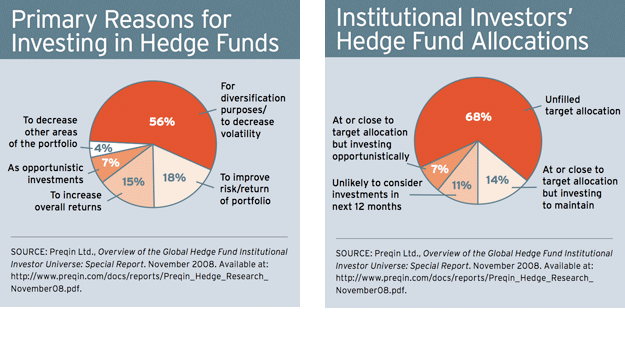 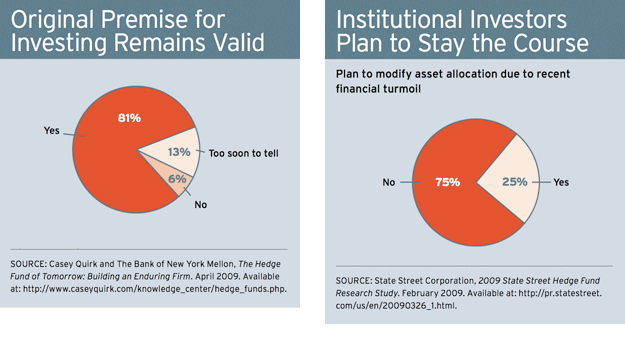